A complete success and a total joy: the tourism seminar organized by the University of Cuenca 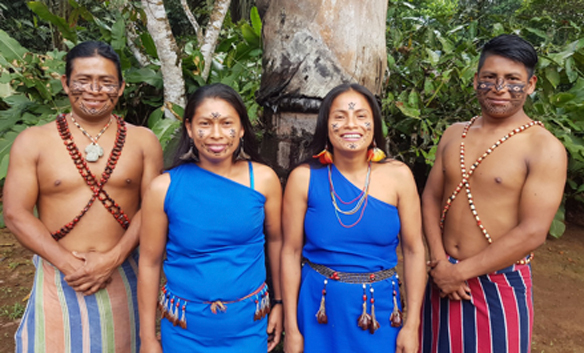 Everything was ready at our AMAZONICA Academy. All of our 19 beds were booked.

Then they arrived on 9 January: two Cessna’s 206 with eight Achuar students from Rio Pastaza and a Cessna 182 with three instructors from the University of Cuenca: Vanessa - Hotel business and housekeeping, Rafael - Culinary arts, and Miguel Ángel - Agriculture. All less than 30 years old, awesome people, and in the rainforest back country for the first time.
The Shuar students were mostly locals from Yuwints working with our project. They arrived on foot from neighboring villages, but Chumpi was a total hero. He is from the mountains to the south and walked for three days to participate in our seminar. In total there were 14 students, 19 to 52 years old. All have a general qualification for university entrance and are interested in working in the tourism industry. 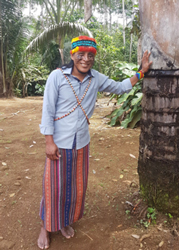 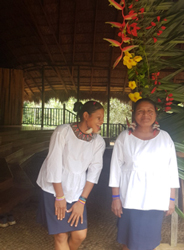 Mens sana in corpore sano: "a healthy mind in a healthy body"

So a motley group had gathered: four women and 10 men – happy, hard-working, and tireless athletes. Most often, they played volleyball, but they also played soccer with the village residents, and went swimming together in the river and fished at night.

The instructors from Cuenca, located 2550 m above sea level, were completely amazed by the forest, our academy, and the students: "They are so genuine, so unspoiled, so positive", they raved. Okay …, I thought, but the fact was that this group was extraordinary with respect to both conduct and grades. 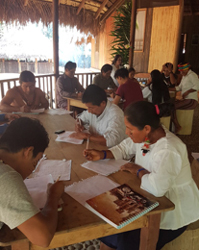 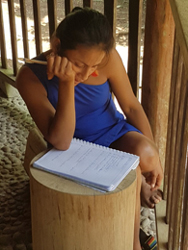 Class was held from 9:00 a.m. to 12:30 p.m. and from 2:00 to 4:00 p.m. Each day they studied two different subjects in theory and practice. Afterward they played sports, had an evening meal, and did homework. For the instructors who weren't currently in class, the older Shuar people gave tours through our thematic trails or had them practice with the blow gun. The Yuwints airstrip, which is 600 m long, was a favorite place to jog.

In the culinary arts area, the university had also planned to give a cooking course. But I removed it from the program and explained to the instructors that there were six Achuar men among the students. Just imagine: A proud Achuar man never works in the kitchen. Completely out of the question. He does not even enter the kitchen.

But no one starves. All of the Achuar and Shuar women who work with our project can cook – and really well! I have been giving cooking courses for years.

So instead we taught setting the table and serving, food hygiene, purchasing, and storing. Everything was really important and not below the dignity of an Achuar man. Especially popular were opening wine, allowing guests to taste it, pouring properly, and a friendly "Cheers!". Perfect.

Our Agustín, 34, the former president of the Achuar Confederation, had the best grade in the culinary arts with 20 of 20 points. 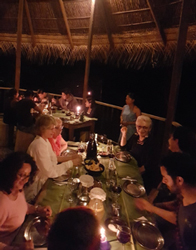 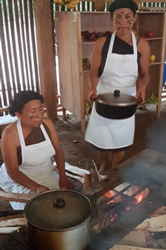 Hotel business and housekeeping: You will hardly believe it, but the top Shuar student was Ernestina, at 30, the oldest of three sisters living in Yuwints who are getting blind.

We were able to offer a scholarship to the English academy in Puyo. Not only can she speak with the guests somewhat, but she knows all of the terminology in her job area: housekeeping. We taught her how to clean, wash, mend, and make beds many years ago. And now, even though she cannot see everything anymore, Ernestina can do everything blindfold. 18.5 of 20 points. We were quite moved.

In order for her to have a job in housekeeping for as long as possible, we gave her a young Shuar apprentice. The two are an unbeatable duo.

In this subject the overall best student also earned 20 of 20 points, Agustín – who already had been the best in the culinary arts.

Boy, oh boy! Agricultural engineer Miguel Ángel had gotten on the wrong track in his lesson on crop rotation. As the instructor explained that to the category of Quenopodiáceas for example belong red beets, I saw confused faces. The one term was as unfamiliar as the other. Red beets grow in the highlands.

The next day, Miguel Ángel then explained the various fertilizers along with the chemical formulas. STOP!!!

I took this very nice, reasonable instructor and gave him some insight into the forest and the people of the Amazon region. We decided only to talk about what grows in the tropics, no instruction in chemistry and physics, and everything in everyday Spanish. Which was already hard enough for some students. 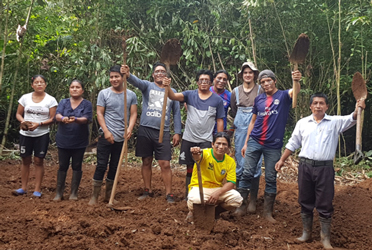 Then we enjoyed some child's play. The students were allowed to clear an area of 10 m x 10 m in the forest behind the Academy, prepare the soil with organic fertilizer they made themselves, and plant it. The instructor gave out the rest of the seeds to the Achuar and Shuar so that they could get started planting vegetables at home.

Agustín was also the top student in the agriculture test, but this time with just 19.5 out of 20 points. Theory tripped him up there.

And the Winner is …

Before the big final exams in all of the subjects, which would take two days, the students were nervous and studied what they'd learned again and again. For days, the students got up at 5 a.m. and went through the information again together.

The grades given were "excellent", "good", or "average". Numbered grades are received only after all of the seminars have been completed.

And then they wrote down as much as they knew. If they weren't sure of their Spanish ability, the students were allowed to ask questions. Of course, I was about to burst from curiosity and watched over the instructors' shoulders as they corrected the first tests.

Unbelievable – the top three spots went to the Achuar Machos from the deepest forest, whose parents could not read or write. And Agustín was the best of the best – truly "excellent"! Overall, four received "excellent", only two "average", and all of the other Shuar and Achuar earned grades of "good", for which the University of Cuenca awarded certificates. 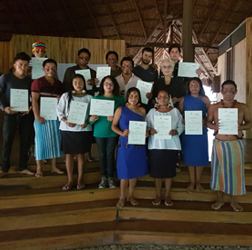 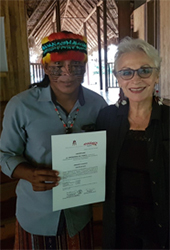 THANK YOU to all who donated!

Many of you donated last year so that this first part of the seminar could be held. With such wonderful results, I guess you don't regret a cent of your donations.