It all started with a vacation trip to South America and a fateful encounter with indigenous people. Back in 1980, Mascha Kauka and her husband, Uli Pohl, travelled as tourists to the rainforests of Ecuador. There they met the people of Chachi, which were threatened in their livelihood. Logging companies destroyed the forest and demanded the resettlement of the natives by the Government. Caught up in this desperate situation, Chief Tapuyo and his eldest son asked the visitors from Munich to help them. Mascha Kauka showed understanding and compassion. Initially, the author was unable to help as a very busy schedule awaited her at her private publishing company in Munich. 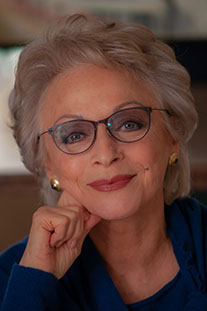 Only after Mascha Kauka had received mail from the jungle after returning home, where the indigenous people emphatically asked for her help, did she begin to seriously address their problems. Thanks to her abounding personal dedication and seemingly inexhaustible energy, she actually managed to save the Chachi’s habitat in the jungle. But this was just the beginning.

Her master plan was so convincing that even the Ecuadorian government asked Mascha Kauka for help in working with other indigenous groups. For more than thirty years now, she travels regularly to her supporters, the indigenous peoples in the rain forest. They know that such a sensitive habitat for humankind and nature requires special strategies. Convinced by the idea that modern technology can be used wisely in the rainforest only in line with traditional values and the nature conservation, Mascha Kauka and the natives work hand in hand to shape and preserve life in the Amazon Basin.

Helping those in need to gain success through their own work as well as the protection of the natural environment.

The future quality of life on Earth depends significantly on our ability to maintain the balance of nature as we are all part of it. Our hearts and minds demand that we protect our last remaining rainforest by supporting indigenous peoples, because we share a common future.

Time is running out fast so we want to meet enough reasonable people who wish to work for a livable world for future generations.

Man is destroying nature, so man should work on conserving healthy ecosystems and restoring those under threat. For the Amazon Basin, we are pinning our hopes on the indigenous peoples in the forest, who are natural born rangers, and on the youth of the world. We enable both to work together for this common goal.

​(Names that she received from the indigenous people: The Shuar call her “Yaanúa”, the Star Woman; the Achuar call her “Nunkui”, Goddess of Fertility; and the Kichwa “Nina Sicha”, Phoenix)

High school and graduation in Munich. Studies of German and Romance languages and literature, study of history at the universities of Munich and Paris. Volunteer at publishing houses in England and Germany

Editor for the “Fix and Foxi” children’s magazine

Establishment of an own publishing company, RV-Officin. Publication of children’s and cooking books.

Second journey to Ecuador. First contact with the indigenous people of Chachi, support on a private basis

Foundation of the charitable NGO INDIO-HILFE e.V. in Germany

Parallel activities in the own publish company and and

Inception of the AMAZONICA Foundation

20 years of collaboration with the people of Chachi (7,000 natives) in the last tropical rain forest on the Pacific coast, province of Esmeraldas, Ecuador. Numerous necessary projects in various areas, including surveying and legal allocation of the traditional settlement area.

Twelve-year collaboration with the Pilahuines, Highland Quichua in the province of Tungurahua, Ecuador (about 5,000 mountain farmers). Mainly organic production and marketing of agricultural goods. Large-scale water project. Training courses and study grants. Purchase and furnishing of a large house as a hostel in the capital Quito, near the native market. The mountain farmers that arrive with their goods are provided with shelter and protection here during market days.

First “Alternative Circle” on renewable energy in Puyo, Pastaza Province, Ecuador, in collaboration with the University of Applied Sciences Weihenstephan/Freising.

Start of the pilot project AMAZONICA for the “protection of the tropical rainforest by fostering its indigenous peoples.”

UNESCO grants its patronage for the AMAZONICA projects.

Second “Alternative Circle” on renewable energy in Quito together with the Polytechnic EPN, Quito, the University of Applied Sciences Weihenstephan, the European Climate Alliance and the DED.

The largest malaria campaign in the Amazon region (up to mid-2007); installation of the first medical infrastructure outside of the road network.

Completion of the first phase of the pilot project. Creation of the AMAZONICA Foundation.

The second phase of the pilot project starts in the model communities and six other villages. Cooperation agreement with the University of Cuenca, Ecuador. The academic system begins its work, even though the buildings are not yet available: One year “Seminar for indigenous leaders”. The first graduate student of the University of Munich spends two months working in Sharamentsa.

Over 200 villages wish to participate in the pilot project for community development. German universities and colleges to send students and faculty to internships and interdisciplinary case studies.

The physical infrastructure at the sites in Sharamentsa/Achuar and Yuwints/Shuar increases for the academy.

Inception of the AMAZONICA Akademie charitable GmbH in Germany.